Driving your car through any major metropolitan area can be difficult and frustrating.  The levels of traffic congestion in most urban centres are overloading the roadways and therefore urgent change is needed.

Cities were never planned for the volume of traffic seen today.  Streets are too narrow, urban planning has been endlessly modified and tweaked with layers of disparate elements over decades, and parking is inadequate with lots overflowing to streets which is intensifying the congestion. 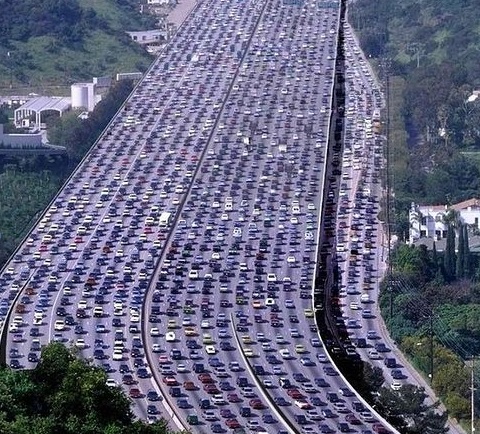 Traffic congestion not only impacts individuals trying to shop and visit friends, but it stymies business people from getting to meetings, delays first responders from proving timely emergency services, blocks delivery companies from meeting deadlines, impedes public transit companies from providing efficient, cost-effective, and clean transportation, and much more.  Traffic congestion can paralyze an entire city.  The financial impact is significant. This modern day urban living epidemic must be addressed and remedied, but how?

The digitization of traffic is a logical first step.  Leverage the Internet of Things (IoT) to groom traffic and better manage traffic flows would go a long way to help, but not fully solve the problem.

While traffic management measures are critical to solving this issue, digital technology alone cannot remedy everything.  Other tactics must be deployed in concert with an IoT based traffic flow system.  These can include:

With these changes, an IoT based traffic flow system can drive its greatest impact.  But, what exactly can IoT do to help tame traffic woes?

The act of digitizing a city is not just about smart traffic lights, although they are a big part of the solution.  Smart cars are a critical piece of the puzzle too. 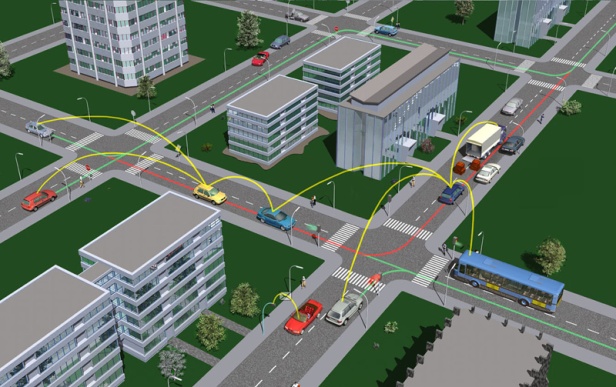 While we will need at least a decade to implement it all, ‘vehicle to vehicle’ communications will be vital.  Through wireless connections, cars will communicate to each other and share real-time telemetry such as speed, direction, acceleration, braking, turns, and performance.  Other vehicles will be more aware of the vehicles around them.  Not only will these cars talk to each other, but they will also talk to the traffic signals and roadway infrastructure, which in turn will coordinate with centralized traffic management centres to orchestrate the flows within a city.

Cars and other vehicles will form organic groups or platoons of 8 to 25 vehicles that can move as a cluster through streets in tight formation.  The size of each platoon is planned to the requisite flow needs for the time of day, the intensity of traffic, pedestrian traffic, and other parameters. More efficient movement through a city is possible with this clustering technique.  It is the digitization and communications that make it possible to begin with and IoT is essential to instrument the setting in order to facilitate these capabilities. 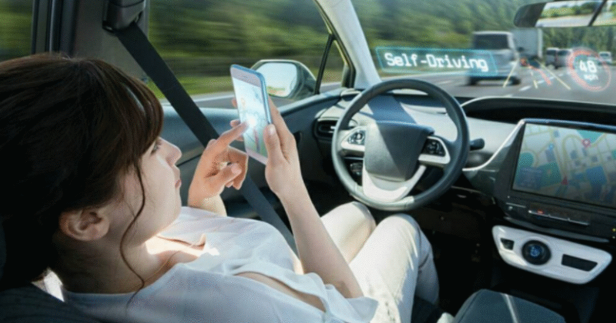 Self-driving cars will greatly enhance these capabilities.  By removing the driver from controlling the cars, the computers can deliver a more tightly coupled linkage between clusters and the traffic infrastructure.  Collision avoidance will be the greatest result from self-driving cars.  Accidents back up traffic and jam urban roadways for miles which propagates outward affecting other arteries that connect and cross the impacted street.

Once the location of an accident is known, then autonomous vehicles can instantly and automatically be rerouted to bypass it limiting its impact on flow. 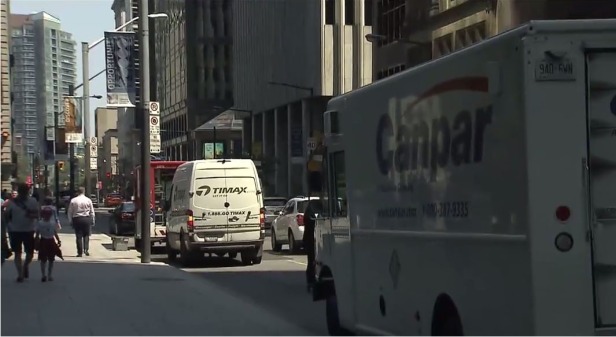 Getting package delivery trucks  off the roadways and into the airways can provide enormous benefits too.  Companies like Amazon, FedEx, UPS, Purolator, and the post office are all exploring drone delivery options.  Reducing the number of truck trips within a city can have huge dividends, as delivery trucks not only add more vehicles to the flows but also aggravate flows with street parking. 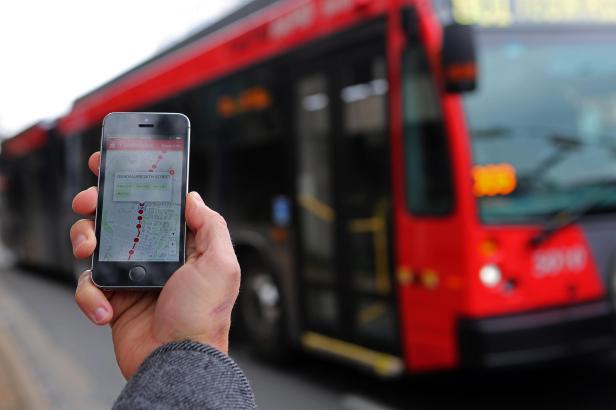 Digital signage, web applications, and smartphone notifications related to bus arrival times will alert passengers to better synchronize up with the public transit and can manage pedestrian traffic.  It is hoped that better awareness will prevent folks from running across streets against the lights to catch a bus.  These darting pedestrians seriously impact traffic and cause accidents. 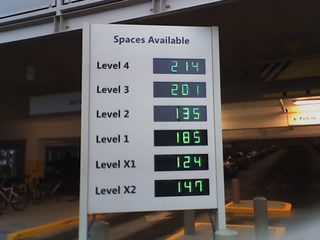 Smart parking lots that communicate vacancies will tell drivers where they can park and will direct vehicles to available parking stalls.  Electronic signs will declare the number of available parking stalls on every floor of a multi-level lot.  This can reduce those drivers that prowl the streets ever so slowly hunting for a spot and delaying cars who cannot get by them.

Integration with city planning will allow smart cars to know when and where road construction, streetlight replacement, and traffic light repairs are planned and will permit automatic rerouting around these choke points.

Traditionally, traffic lights were static and dumb.  They ran on timed intervals with virtually no awareness of the other traffic lights or the traffic flows.  Then, the advent of a centralized traffic computer came into the mix to play with the timing of the traffic lights.  It offered some basic time of day and day of the week control.  These centralized traffic management systems permitted extension of green light duration to permit more flow one way versus another.  But, they were still blind to the actual flows of traffic.  Next, metal detecting sensors where added to intersections to count vehicles driving past and this approach provided some limited feedback to these centralized computerized traffic management systems.  Finally, some cameras were added to give the staff some intervention into the traffic management systems based upon what they saw and what the computers understood.  Not all intersections could be monitored so while a step forward, it was still somewhat limited in managing traffic. 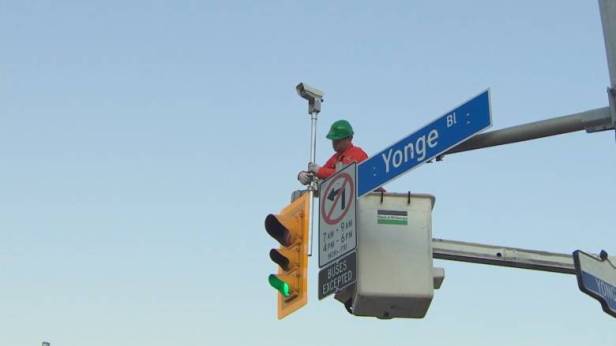 The next generation of traffic lights will possess a distributed architecture instead of a centralized model.  Each traffic light will use localized CCTV camera based analytics to count vehicles and be aware of pedestrians.  They will function independently but be orchestrated in clusters, subsections of streets, by whole streets, in coordination with other streets and cross streets, regionally, and even citywide.  The cameras at each intersection will provide the edge computing with greater situational awareness.  Communications to the traffic infrastructure, and the vehicles will extend this awareness.  Clusters of vehicles that move through the city will communicate ahead and the traffic lights will be advised of their arrival time, density, and speed.  As vehicles leave and are added to the cluster, everything will adjust dynamically in real-time.  With this level of command and control, the decision-making process will be automated and pushed to the edge where it matters most.  Feedback and expert control for intervention can still be had centrally. 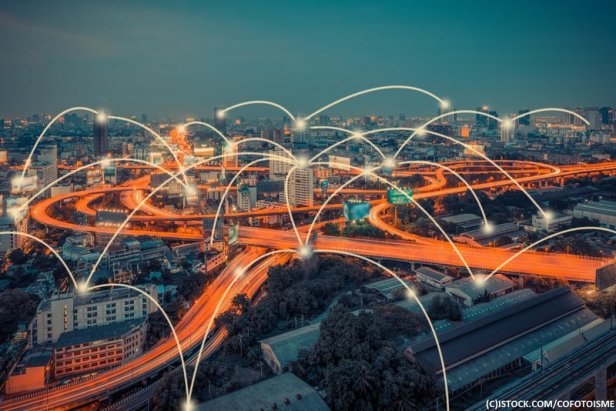 This next generation traffic control system will be federated and can ‘make and break’ network relationships upon demand.  The volume of raw informational data flowing will be significant, called ‘Big Data’.  Some of the data will be processed at the edge and some will flow upstream to the new traffic management system.  Derived data that is machine generated from aggregated data from edge sources and sensors will be generated too.

Artificial intelligence will be necessary to make sense of the big data and to drive upstream decision-making that will flow back downstream to the intersections when necessary.  The addition of external data sources, such as weather data will be included to tweak the flows to accommodate the external environment elements.  As elements like heavy rainfall and intense snowfall affect vehicle movement, the traffic systems will adjust to respond to these impacts. 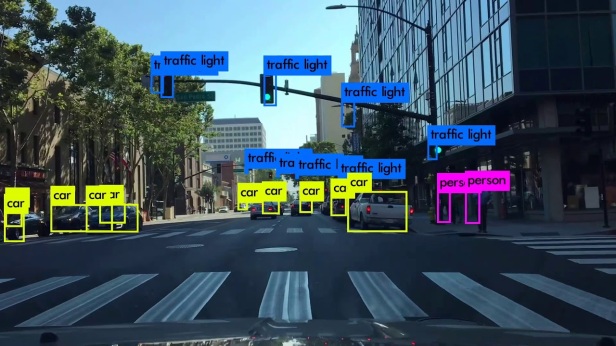 Machine learning will be needed so the traffic management systems can capture the unique ballistics surrounding special events like sports, marathons, parades, and fires.  Event profiles will be created so when an event repeats, the systems will be prepared.  Event schedules for local major sporting gatherings can be preloaded into the system so it can prepare itself in advance and provision the ideal scenarios for allow for optimum traffic flows.

Security is critical for such vital infrastructure.  Therefore, a federated security solution that maps to the federate network is required.  Firewalls, Intrusion Detection Systems, Intrusion Protections Systems, and AAA (Authentication, Authorization, and Accounting) are all necessary solutions to be deployed over this network fabric and at the headend facilities.  Leveraging a Blockchain solution between the broadband nodes is also appropriate.

Are we close to this future vision yet?  No, but it is coming.  Along with it, will be many benefits beyond keeping a city moving.  The best outcome will be improved safety.  If we have fewer accidents, vehicle to vehicle collisions and especially reduced numbers of pedestrians struck by cars, then life will be improved.  Attacking pollution will be another gain for society.  Cutting traffic delays and allowing vehicles to flow freely within our urban centres is a prized outcome that drives economic development.  But, it is a journey that many cities are just now beginning, and it will undoubtedly have many twists and turns as we move forward.  There is really no simply defined end destination, just a long and winding road ahead with many barriers and obstacles to overcome one by one.