Volunteering with the Red Tail RISE ABOVE Travelling Exhibit at AirVenture has been one of my great life pleasures.  Each year when I visit Oshkosh for the annual gathering of the aviation community, I participate in this powerful CAF program.  What makes it special is the memorable times that I get to spend with the Tuskegee Airmen.  These pilots are to be admired for the adversity that they endured, and the accomplishments that they achieved both during WWII and afterwards.

An aspect that fascinates me about these famous pilots is how many of them returned home and pursued quality education.  Without exception, these airmen are smart, capable, and educated people.  Now in their 90s, they are long retired, but I enjoy hearing about their post-war lives as much as the heroic tales from their war years.  Some continued in the military, while others left to pursue careers as educators, engineers, law enforcement officers, administrators, and much more.  Even as civilians many remained connected to the military through the Reserves and the Guard.  Without exception, they all contributed greatly to society, both after the war years and during the war years, although we honour them for their significant wartime contributions.

One of my favourite Tuskegee Airmen is retired Lieutenant Colonel Harry T. Stewart, Jr.  Of course, all the airmen are fantastic, but I hold Harry in a special place in my heart

largely due to his gentle sense of humour.  Harry makes me laugh.  As well, Harry worked as a professional engineer during his working years and since I have spent most of my career in the world of engineering, I naturally hold this profession in the highest regard.  So, I can easily relate to him.  Harry is a true engineer as is evident in the way he sees the world around him.  Once an engineer, always an engineer.  It is a way of thinking and a passion.

During AirVenture 2017, Harry was our guest star at the Travelling Exhibit.  He is a humble man in the face of all the admiration that visitors lavish upon him.  He meets folks, shakes hands, signs autographs, and kindly poses for an endless line-up of selfies. 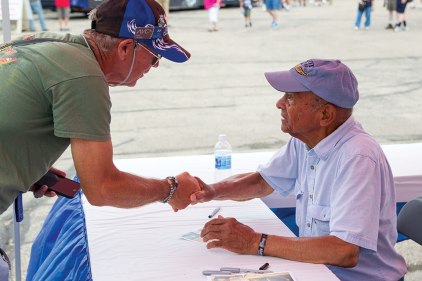 We spent a few days together as I corralled and managed the visitors and tried to keep Harry comfortable from the constant onslaught of adoring fans.  After all, Harry is a modern American hero.  This is the same person who after the war was a part of the team that won the first ever USAF fighter gunnery competition in 1949.  This competition became the famous Top Gun event known from the Tom Cruise films.  Harry and his teammates were still flying the obsolete single-engine P-47 aircraft in that competition.  However, they led the event from the start and won in the conventional aircraft division.  In addition, he was awarded the Distinguished Flying Cross for three air combat victories in one day during the war on April 1, 1945, so he has earned a place in the history books.  In 2007, Harry was one of about half a dozen Red Tail pilots to meet with the President and receive the Congressional Gold Medal.  Harry is a bonafide celebrity. 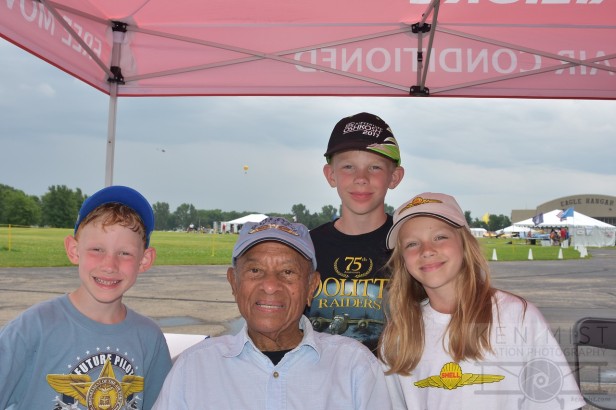 When the Oshkosh airshow begins every day, the crowds at the exhibits naturally diminish.  Harry has time during the airshows to relax.  The Travelling Exhibit is parked at Pioneer Field across from the AirVenture Museum, in the KidVenture area.  KidVenture allows young people to explore aviation from several different fronts.  Kids who complete the tasks at the ‘Future A&P’ booths will receive a Future A&P pin, two hours of official FAA credit toward their airframe and powerplant (A&P) certificates, a stamp of completion in their passport booklets, and, if they are among the first 800 kids to complete the skills, a tool kit.

As the thinning crowds watched the airshow, Harry and I sat in the shade of the tent top and chatted.

Out of the blue, from the Pioneer Field hangar, pranced a young girl about 10 or 11 years old.  She wore a blue and white polka dot summer dress, white running shoes, and her shoulder length blonde hair glistened in the radiant midday sunshine.  Without hesitation, she skipped her way straight over to meet Harry.  She flashed a jubilant smile and enthusiastically said, “Hello”.  This young lady carried one of the prized blue toolboxes, so clearly, she had accomplished all the A&P skills and completed her passport.

We talked for a few minutes and I told her about Harry and the Red Tails.

Harry is wonderful with children, so he engaged this young lady in an animated conversation.  It was immediately clear to us both that this was no ordinary child.  As the conversation progressed, Harry asked, “What’s in your case?”  In an instantaneous response, she squarely placed it on the table in front of us, unlatched the cover, swung it around to face us, and opened it wide so we could examine its contents.

Her kit had over 120 shinny tools and she knew every one of them. For over 15 minutes she did a comprehensive demonstration of each tool, one at a time.  We could not have stopped her if we tried.

She told us about her numerous screwdrivers – slotted, Philips, and Robertson.  As a Canadian, I told her that I was astonished that she knew what a Robertson head screwdriver was; as it is unique to my country.  Harry knew what it was too as he had worked and lived for over a year in Manitoba.  But how could this youthful diminutive girl know such a rare fact?  She simply flashed a smile of contempt at me and continued unfazed.  Absent of her uttering a word to me, I imagined her saying, “Oh please”.

Without skipping a beat, she next showed off her pliers; first the needle-nose, then the snub-nose, and finally the vise grips, and explained in crisp details exactly how and when to use each of them.  Finally, she told us about her new socket sets in both SAE and Metric.  She said with absolute authority, “Metric is used in foreign countries, but we use them in the United States on airplanes too”.

When she completed the demo, she precisely repacked her kit with every item returned to its exact spot and closed the case.

Just as quickly as she appeared, she collected her autograph from Harry and skipped back into the hangar.

Harry and I sat absolutely dumbfounded.  She was amazing and we were at a loss for words.  Harry, in his mild way, turned to look at me, and said, “That girl is an engineer!”  I agreed with a silent nod.  All I could say was, “Wow”.

We have all these STEM programs today aimed to teach girls to embrace the Science, Technology, Engineering, and Math disciplines.  But here was one petite girl who was already far ahead of anything that we could even think of teaching her.  Her mind was fully engaged, and she embraced technology with a focused passion.  Exactly as it should be.  STEM was already coded into her DNA.  Sure, she looked like she should be carrying a Barbie doll, but we both believed that would be highly unlikely.  Harry and I marveled at her bright intelligence and youthful delight.

When I remember this amazing moment, I clearly hear Harry’s words and I think, “She IS an engineer”.

He is a Senior Executive with IBM Canada’s Office of the CTO, Global Services. Over the past 14 years with IBM, he has worked in the GBS Global Center of Competency for Energy and Utilities and the GTS Global Center of Excellence for Energy and Utilities. He was previously a founding partner and President of MICAN Communications and before that was President of Comlink Systems Limited and Ensat Broadcast Services, Inc., both divisions of Cygnal Technologies Corporation (CYN: TSX).