One of the many aspects that sets 5G apart from previous generations of cellular technology is Edge computing.  Edge computing is also called FOG computing and Cloudlets.

Edge computing is the placing of a server outside of the core or the centralized cloud and locating it closer to the users in a distributed model.  However, it is not operating in isolation at the edge and collaborates with the centralized cloud servers in the form of a federated architecture.  It is expected to be located in the carrier’s central office (CO) or even at the macro cell tower sites.  It is the closer proximity to the user that enhances the functionality of the edge server.

These edge servers provide a virtual machine with multiple capabilities.  These VNF (virtual network functions) leverage the compute, storage, and analytics at the network’s edge.  A VNF refers to the implementation of a network function using software that is decoupled from the underlying hardware.  Examples of VNF can include artificial intelligence, firewalls, intrusion detection systems, intrusion prevention systems, routers, internet injection points, channel bonding systems, and much more.

In order to federate these edge servers and have them coexist and collaborate with the cloud seamlessly, the software makes use of microservices.  Microservices are a software development technique – a variant of the service-oriented architecture (SOA) architectural style that structures an application as a collection of loosely coupled services.  In a microservices architecture, services are fine-grained and the protocols are lightweight.  Instead of building a program as an unwieldy monolithic application, it is built as a collection of modules.  These modules can be located wherever they need to be to perform in the most optimized manner; in the cloud, at the edge, or both simultaneously.

As with its predecessor 4G, 5G was developed in a direct response to the growing number of mobile devices seeking an internet connection; however, this time around we are no longer talking about connected phones or tablets.  The rise of 5G coincides with the explosion of connected devices and systems associated with the Internet of Things (IoT).  Smart heating systems, wearables, and vehicles all bring with them large amounts of data.  In addition to more processing power, 5G promises speeds 10 times faster than those of 4G, meaning a sensor detecting a significant pressure change in an oil field then it can report back to the refinery instantly for correction and eliminate the risk of costly downtime.

Processing these high volumes of data, at a faster speed, will require new antennas, new devices, and new applications for wireless data.  No matter what the setup looks like, the influx of additional data – which will need to be processed in real-time – will drive the need for edge computing.

Recognized by many as the next significant enterprise technology trend after cloud computing, edge computing refers to infrastructure that enables data processing as close to the source as possible.  It allows for faster processing of data, reducing latency, and improving customer experiences.  For some industries, the need for rapid processing extends beyond customer satisfaction.  In the case of medical wearables, for instance, a lag in data processing could create a life or death emergency.  This type of computing will require closer data centers as well.  In fact, IDC predicts that internet providers will add micro-data centers into or nearby 5G towers as a means of creating this access.

So what exactly is edge computing? “The edge is anything that is close to the users,” said Sunay Tripathi, chief technology officer of MobiledgeX, which recently touted the world’s first public mobile edge network deployment with Deutsche Telekom.

This could be your devices at home like Apple TV or Alexa or the servers right across the street servicing your neighborhood.  For him, it is how your home Internet connects to the world.

Tripathi says, “Keep it local, as close to the users as possible, relieve the strain on the public cloud and on the network backbone.” 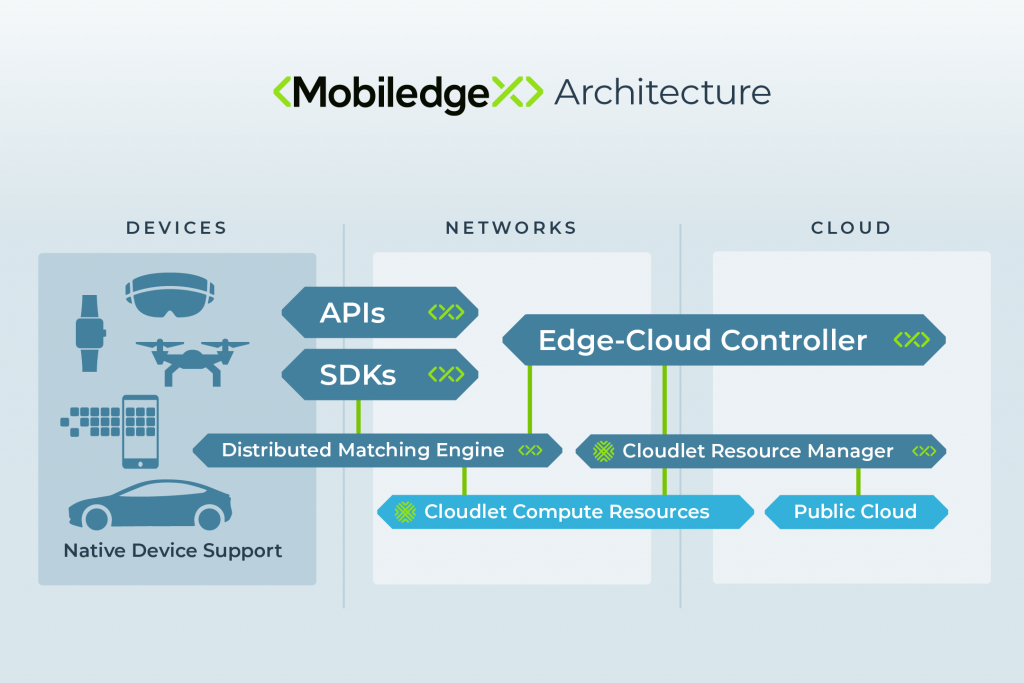 It does not matter what kind of device you have.  The nearest commute to the edge server is vital for performance and real-time attributes.

Edge technology leverages the trillions in investments operators have already made in their networks to support sub-30-millisecond communication between users on existing networks – anything above 30-millisecond and there will be a lag that will negatively impact performance.

When 5G becomes available, speeds could drop to as low as 10 to 20 milliseconds.  Edge server traffic automatically searches for where the network is not already oversubscribed.

If you are a mobile user – be it a group of cars or trucks or drones – you connect to the nearest tower and edge servers connect the infrastructure close to you.  The developer’s planned workflow is not changed by the advent of edge computing, just the distances travelled are changed, which impacts favourably on performance.

For example, the operators of a 15-minute immersive video game will see a significant change in their cost model.  Either the devices and/or the games are connecting via the edge, but instead of buying a CPU for two to three months in the cloud to host the game, the developer only needs to one CPU in the public cloud for that brief time.  This ad hoc costing modal will greatly reduce consumption costs for the game operators and speed up the game as the compute resources are so much closer to the end user.  Instead of all gamers connecting to the centralized cloud, they connect to the local cloudlets and have direct access to better, faster, and more efficient compute resources to enhance their gaming experiences.  Collaboration with other gamers is still easily connected via the cloud or even better, with peer to peer connections that never traverse the core networks and systems.

In the traditional path to connectivity, if you have 10,000 users in 10,000 locations, you would have to pay 10,000 times.  Instead of more static deployment of public cloud, you would be more dynamic on the edge with a lot more sharing.

Enabling applications to be localized in edge compute close to end users first and foremost improves network transit latency.  Latency is a significant driver in improved performance as is high reliability, e.g. through setting up radio bearers that allow low block error rate tolerance.  Edge compute combined with the optimized latency performance of 5G NR air interface and 5G Core processing can reduce round-trip-time by up to two orders of magnitude in situations where there is tight control over all parts of the communication chain.  This will enable new classes of cloud applications, in such areas as industrial robotic/drone automation, V2X, and AR/VR infotainment, and associated innovative business models.

Edge compute is also important for localization of data and efficient data processing.  Industry and Government regulations may require localization of data for security and privacy reasons.  Certain application scenarios may pose restrictions on the use of excessive transport bandwidth or may require transport to external sites to be scheduled by time-of-day, requiring local storage or caching of information.  Additionally, there may need to be local processing of information to reduce the volume of traffic over transport resources.

Edge cloudlets are expected to be deployed at different levels of distribution, which may be phased in over time.  Core data centers exist in networks today, typically at regional levels (a few per country), and will continue to host centralized network functions.  Metro level edge clouds, both network operator owned as well as operator-neutral entities, will host low latency broad-based consumer and enterprise applications.  Far-edge clouds will be located within a few 10’s of km of end users in network Central Offices or cell towers and will host ultra-low latency and/or high reliability applications and may initially be targeted opportunistically at high value industrial automation and IoT users.  On-premise clouds sit within enterprise locations and serve similarly stringent applications; they exist as fully-owned private clouds today but are expected to increasingly be addressed by web scale cloud operators and network operators extending their cloud capabilities to the very edge.

In addition to hosting new 5G era services, the other major network operator driver for edge compute and edge clouds is deploying virtualized network infrastructure, replacing many dedicated hardware-based elements with virtual network functions (VNFs) running on general purpose edge compute.  Even portions of access networks are being virtualized, and many of these functions need to be deployed close to end users.  The combination of these infrastructure and applications drivers is a major reason that so much of 5G era network transformation resolves around edge cloud distribution.

According to a new Gartner report, “Around 10% of enterprise-generated data is created and processed outside a traditional centralized data center or cloud.  By 2022, Gartner predicts this figure will reach 75%”.  Gartner defines edge computing as solutions that facilitate data processing at or near the source of data generation.  For example, in the context of the Internet of Things (IoT), the sources of data generation are usually things with sensors or embedded devices.  Edge computing serves as the decentralized extension of the campus networks, cellular networks, data center networks, or the cloud

The adoption of 5G and edge computing will drive new expectations for an always-on, high performing networks, and services, which will lead many enterprises to embrace automation.

Riggins, J. (2019). How Edge Computing Will Deliver on the Promise of 5G. The New Stack. Retrieved October 11, 2019 from, https://thenewstack.io/how-edge-computing-will-deliver-on-the-promise-of-5g/

He is a business and technology consultant. Over the past 15 years with IBM, he has worked in the GBS Global Center of Competency for Energy and Utilities and the GTS Global Center of Excellence for Energy and Utilities. He is a founding partner and President of MICAN Communications and before that was President of Comlink Systems Limited and Ensat Broadcast Services, Inc., both divisions of Cygnal Technologies Corporation (CYN: TSX).

He has served as a Member, SCC ISO-IEC JTC 1/SC-41 – Internet of Things and related technologies, ISO – International Organization for Standardization, and as a member of the NIST SP 500-325 Fog Computing Conceptual Model, National Institute of Standards and Technology.

One thought on “5G: Edge Computing”